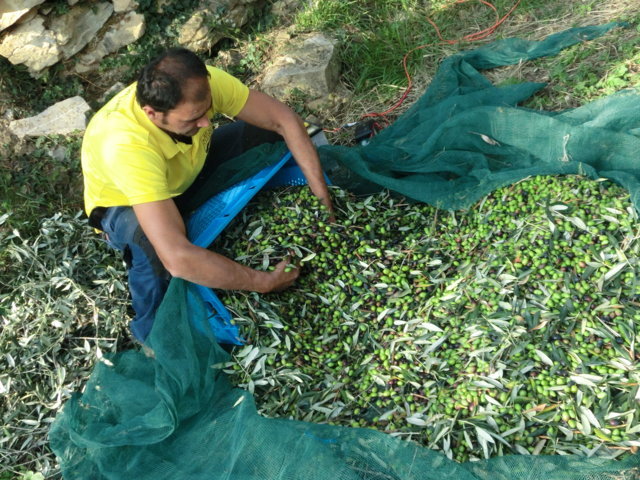 And that makes five. For the fifth consecutive year, we have reaped the fruit of a year’s labour in the olive groves of the Riviera Ligure. From 15 to 17 November 2017, our terracing of Lucinasco with 145 olive trees of the Taggiasca variety was the setting of the process called abbacchiatura [beating down the olives tress with poles] of olives harvested using mobile nets. Fresh olives, taken immediately to the olive press for milling. Hard work as usual: up and down ladders, different levels, stones, morning damp then heat, sweat, a quick meal … a Ligurian olive grower’s routine. In total, 2,168 kg of olives are delivered to the olive mill from which 460 kg of oil are produced and certified DOP Riviera Ligure, with a mention for the Riviera dei Fiori. And that’s how it was, with a certificate of eligibility n. 30/2017 received on 7th December, 502 litres of extra virgin olive oil DOP from the Riviera Ligure ready to be used during the activities and projects of the Protection Consortium.

Obviously, the results can be seen: productivity, sensory properties, chemicals. Initial data shows a yield of 21.2%. A fairly unique data given the generally higher yields registered in the region. 2017 was an arid year to say the least. The olive groves of the Riviera Ligure were not irrigated, and even if the intervention to facilitate fruit setting was useful, the olives have certainly felt the lack of water. This has meant leaving olives to drop prematurely from the trees. Normally in dry years, the yield of oil is higher: there is less vegetation water inside the fruit. But, in our case, the trees have behaved in a ‘normal’ way, usual anyway for the areas situated in so-called ‘domesticated’ locations, with good exposition and no woods surrounding them.

The olive grove’s ‘identity card’ is also confirmed by sensory and chemical evaluation in line with those of previous years. We are, in the end, pleased after all the efforts we have made.

Attached are the unit costs. Now you can evaluate them on a five-year basis where the cost of the oil is justified by the premium quality of the product, made with considerable economic and human effort, from a terrain that although graced with a mild climate, is difficult to cultivate because of its extreme slopes.  Difficulty is part of our job, and the sense of satisfaction both we and our clients feel, makes it all worth it.