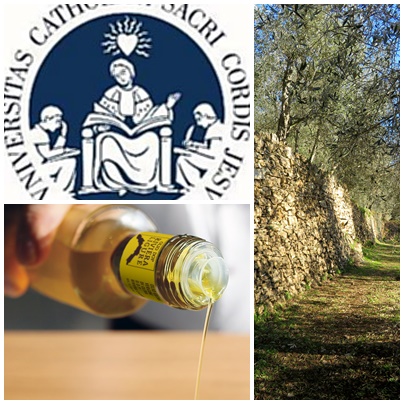 Three seasons of targeted harvesting and 408 georeferenced oil samples – Liguria inch by inch. The DOP (i.e., PDO) Riviera Ligure EVO Protection Consortium acted as the operating arm of scientists from the Università Cattolica of Piacenza. The result has been published in “Food Chemistry”, one of the world’s top journals in the field, coordinated by Marco Trevisan, Dean of the Faculty of Agricultural, Food and Environmental Sciences, and Luigi Lucini of the Department of Food Science and Technology for a Sustainable Food Supply Chain – DiSTAS. Scientists used metabolomics to analyse the chemical compounds that the Taggiasca plant produces in response to the Ligurian environment in which it grows: they worked on two classes of chemical compounds that are entirely distinctive to the Ligurian Taggiasca: polyphenols and sterols. In particular, cholesterol derivatives and certain antioxidants such as polyphenols were found to be the best markers to distinguish Ligurian Taggiasca oil from any other, whether from varieties in Liguria rather than oils from Taggiasca (or other varieties) outside Liguria. Then, artificial intelligence with mathematical-informatics models made it possible to process the numerous collected chemical compound data and define the chemical fingerprint of Ligurian taggiasca extra virgin olive oil.

“In practice,” explains Professor Lucini, “the functioning of the Artificial Intelligence model used, as a concept, is the same as the ‘face ID’ of our smartphones: even if some parameters change (in the face ID, for example wearing or not wearing glasses, length of beard, etc. or, as for Taggiasca, the physiological variability of the season), the set of information contains some factors (in this case content and type of some phenolic compounds or sterols), which are characteristic and therefore distinctive.

“The research identified more than 1,500 polyphenols and sterols used by the neural network model, although about 45-50 were found to be the most characterising ones, the so-called markers, whose profile (presence/absence and abundance) helps to discriminate Taggiasca extra virgin olive oil” Professor Trevisan points out. Among the most represented compounds are antioxidants such as flavonoids, anthocyanins and lignans, all of a polyphenolic nature.

A process that differs from genome research, which focuses the totality of genes present, unaffected by the environment and essentially constant for varieties or sets of varieties.

“This work shows once again that the environment leaves a clearly distinguishable imprint on its products,” concludes Trevisan; “in biology, we speak of plant-environment interaction, in enology it is called ‘terroir’, but in all cases, it means that a specific variety in a defined territory is able to present certain distinctive traits. The study of the chemical composition of the product through metabolomics, combined with artificial intelligence, is a promising and futuristic approach for the protection of typical productions’.

“We are proud and honoured – this scientific outcome paves the way for an ever more committed protection of our excellence thanks to the collaboration between various institutions,” says the President of the DOP Riviera Ligure Protection Consortium.